The swearing in of the people! 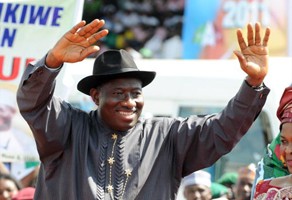 Today we witnessed the swearing in of the 14th president of the Federal Republic of Nigeria. So many events culminated into this single moment in history. Remarkably, a greater percentage of Nigerians came out to vote than was recorded in the past. Apparently it had dawned on us that we had to be mad to keep doing the same thing over and over again and expect a different outcome. We had for long sat at round table discussions, picking sides, condemning, criticizing and denouncing the woes, the foes and the nuances of the game of politics our leaders played. Even the child on the street could list out all the things wrong with Nigeria. Like the popular song by African china, food no dey, water no dey…From corrupt leaders to poor education to a lack of amenities, poor infrastructure, poor sanitation, unemployment and poverty. Poor was the mantra, our problems well-played out for the world to see. But was it enough to depend on the shoulders of a new government to wipe the slate clean and perform miracles? Would Jonathan and his team be able to fight the ills and give us a future we had only dreamed of if all of us continued to carry on, business as usual?

Jonathan Goodluck is a man like you and I. Through time and chance as well as preparation and strategy he emerged amongst others to take the rudder as captain and steer the ship of Nigeria into calm waters. He has the ills of inflation, debts, poor public image, corruption and poverty already calling for his attention not to mention the weighty expectations of the people who voted him into power as well as the eyes of the world watching closely to make sure he follows the script. Do we actually think he can do it alone? Even if he was armed with the best team and not a combo of miscreants and well-meaning leaders as the case is, his work would still be cut out for him.

Democracy is defined as government of the people, for the people and by the people. The word ‘people’ is mentioned three times in that sentence. We are the people of Nigeria and it cannot be over-emphasized that if democracy is going to be our watch-word, we the people of Nigeria must take a stand. No matter how hard our leaders try, if the people don’t make a decision to change then it would all be futile. The government may provide LAWMA and other sanitation bodies to take care of the trash and clean the streets but if the people didn’t dispose of their refuse properly or clean their immediate surroundings, our land would not get any cleaner. It is such an irony that when Nigerians travel abroad, they act all civilized and carry their litter in their hands till they find a bin, some even remember to recycle. They wanna blend in, don’t wanna be fined for littering or act true to type but back home, they throw off the facade, for they are in a land that is not borrowed, where they can beat their chest and act like Kings. They don’t think twice about creating an eyesore everywhere they tread. How will we truly combat communicable diseases if the vectors are allowed to thrive in an environment only fit for animals? Do we actually think Goodluck Jonathan will solve that problem for us?

We talk about corruption and how bad our leaders are but haven’t we wondered why the most seemingly upright men once they have a taste of power suddenly fall prey to greed and avarice? Only a few men have tasted power and remained un-tainted. Could there be a problem with our foundation? Could this generation be one where morals and values are quietly dying out? Why point fingers at corrupt leaders when in our own smaller circles, honesty and fortitude are associated with being dull or a mugu. The patient dog has being rudely awakened to the fact that he is left to go hungry rather than getting the fattest bone. How many young children can resist the urge to steal candy when no one is looking? How many teenagers can resist the urge to hype their school fees when demanding for money from their parents? How many market women can resist cheating a customer to make just a bit more profit? How many people can resist bribing an officer of the law when they are detained for an offence committed? We call it basic instincts, the only way we can survive in a world that’s cruel and selfish but if we stopped for a moment to think about the effects it had on the next generation who were learning closely from the rest of us then we’d realize our country was headed downhill at top-speed.

Our leaders are a subset of the people of Nigeria. They are representatives of everyday life. Isn’t it sensible to think that a change must occur in the people before it reflects in their leaders?
Egypt has shown us the power of the people. As one voice, with one purpose, a nation is unstoppable. We can make changes and resist changes. I beseech us tonight to return to the old ways. To a time when honesty and hard work were rewarded and celebrated. Yes they say a leopard doesn’t change its spots but our children, the tomorrow of Nigeria are like a white board waiting to be written on. Teach them these values, start from the very beginning and in doing so we may be able to bring hope back into our world and perhaps learn a thing or two. For some of us, the lure of wealth and an easy life plus the necessity of the hustle makes it virtually impossible to live a life that is without deception or dishonesty in varying degrees but we must realize that if someone doesn’t take a stand to suffer some injustice so that justice may be served or to suffer some inconveniences so that the right thing may show forth then who are we to point fingers at the men who rule us? Where are the next generation of heroes? Are they wiped out or extinct? Will we continue to celebrate Tai Solarin, Ken Sarowiwa, Fela, Bimbo Odukoya, Y’aradua and all the dead who contributed to the growth of the nation while their memory fades and their labor is forgotten? As long as the fight against corruption continues to be the sole responsibility of EFCC, the only emotion we are allowed to have is envy! How we would all love to occupy those leadership positions and milk Nigeria dry. After all in our own circles, getting as large a chunk of the national cake as we can is still our unwritten agenda!

A lot of lives were lost to post-election violence and people attributed it to religious and political fanaticism but I agree with the few who believe that a lack of education was the root cause. If those men were properly educated, they would have been able to reason for themselves rather than following orders and doing what a higher power had programmed them to do. Yes education is key. Like pastor Sara said, you can bring out the guns and keep those youths in check but it’s like a calabash you forcefully submerge in water. Once you let go, it rises back to the surface. The soldiers would one day return to the barracks and then what next? These youth are desperate, frustrated and angry. Over 4 million Nigerian children are out of school when they should be in it. Sometimes they cannot afford it, other times there are social reasons why they are not in school. If the average Nigerian earns about one dollar a day then we can see why we are sitting on a time bomb. We could ask the government to provide more schools and free basic education as well as vocational schools but if we as a people didn’t play our part then the educational system would still be an embarrassment to the nation. There are so many graduates who are still semi-literate. They started out their education cheating at common entrance and WAEC, doing JAMB at special centres, bribing their way through university, buying certificates only to end up with a degree they were absolutely clueless about and we live in a country where employment is gotten on a who you know basis, where merit is discredited and where graduating with a first class is not a guarantee for success. What incentive do our youths have to stay in school when a degree can no longer put food on the table? The change must start with us.

We speak of a better Nigeria but I must tell you that Nigeria is its people and we are Nigeria. Our leaders are but a few men. It is up to us to plant the right seeds so that we may enjoy the fruit of our labor in coming times. As the new leaders celebrate their swearing in, we must remember that the people were sworn in today for democracy is government BY the people and our talents, our strengths and our abilities must be geared towards building a nation we can be proud of. I charge every Nigerian to recollect every round table discussion they have had about the ills of the country and brainstorm on ways they can make Nigeria the country of their dreams or at least the Nigeria of ages past. If we aim for the stars, we wouldn’t do too badly if we fell on a cloud with silver lining and all the trimmings. 🙂
Happy Democracy Day peeps and don’t you just love public holidays that fall on mondays? TGIM…xoxoxo 😉

5 responses to “The swearing in of the people!”